Respectful burial for wee ones 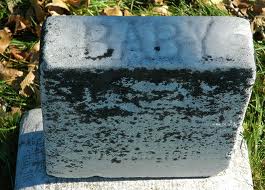 At the beginning of our memorial services, I describe myself lying in an Emergency Room in Nevada realizing that my 9 week pregnancy was over and internally fretting over what would happen to the physical remains of my pregnancy. I had already been a nurse long enough to know how these kinds of conversations went…if I even asked, I would be dismissed as burial for “miscarried” (stupid word) babies was simply not done. This felt very wrong to me, but I didn’t know what “right” would look like.

Why hadn’t anyone come up with something that would be more “right” than giving parents no options and treating tiny ones as medical waste (like the fate of my baby)?

A few years later, I was studying Clinical Pastoral Education (Hospital Chaplaincy, yea…Catholic women can be Hospital Chaplains…more on that another day) and they asked for volunteers to go pray over the babies. We were led down to the basement rather than up to Maternity as the babies were all miscarried (that word again) losses that were about to be cremated and taken to a local Catholic Cemetery.  Well, THAT is closer to “right”.

Another move in my husband’s military career took us to a city where I was worked in the Neonatal ICU and was on the Bereavement Committee when the topic of burial came up again. They didn’t have to ask me twice; I nearly leapt from my chair  volunteering for the project. It would be an uphill battle as our hospital is not religiously affiliated and I would first need to convince leadership that there were enough secular reasons to offer this service.

Before the project got off the ground, the nurse who headed the Bereavement Committee resigned and I applied for her job. With my new title, I had a little more leverage to get the project underway. Trouble was, I had never undertaken a project of this sort or magnitude and was as clueless as I could be. I struggled in fits and starts embarrassing myself repeatedly amongst the various stakeholders before I learned enough to proceed intelligently. It took about 18 months of work and planning to get all of the needed components in place.

Our program would provide free, respectful burial for any loss that occurred prior to birth – from conception through term stillbirth (hate that word too).  Our first burial was in Oct 2006 and we buried 7 babies with a memorial service following. We have had burials quarterly since then and there were babies needing burial every single quarter.

We had 24 babies one quarter and because I had Spanish speaking families, I tried valiantly to get Spanish-speaking clergy. One local bilingual clergyman who I asked to do the service was so mean to me on the phone I wept bitter tears after speaking to him. I had prepared all 24 babies for burial and I did that task singing to their sweet souls rather than weeping, but that meany made me cry.

Doing this project was and is hard, I won’t lie. If you ever want to feel painfully inadequate, try having a funeral for 12 babies, nothing you could ever do will ever be “enough”.

I’ve had people accuse me of having agendas (my “agenda” is that they not get thrown away and that their families get treated with love and respect). I’ve had people tell me that Im “too Christian”, “too Catholic” and “not Catholic enough” (having heard all of these accusations, they must mean that Im about right. Full disclosure: the process is actually transcultural and interfaith and “everybody” is buried there. Our little city is predominantly Christian, however so sentiments expressed by families at the services tend to be Christian.

Even admitting that it is hard, I still encourage others to do this in other cities…it is NEEDED. I KNOW it really helps entire families in their healing. I have seen the poorest and the richest in our city united in the universal experience of loss and death. I have been a witness to a lot suffering and a lot of healing. I will likely never know the full benefit of this project while I’m on Earth…maybe in Heaven.